What Actually Happens to Deleted Data? 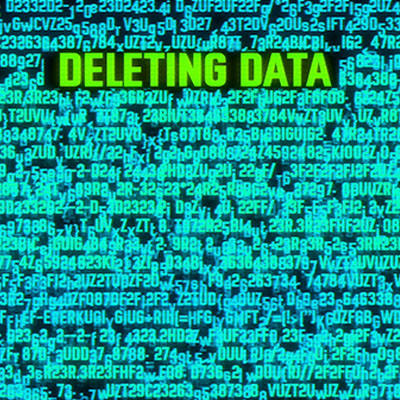 Chances are, you’ve gone through some old files and weeded through them, deleting what is no longer needed. This is especially important when you are upgrading your storage and getting rid of your existing storage media or an old computer. Let’s talk about what really happens when you’re doing so—chances are, you may be overlooking a serious security issue.

How is Data Deleted?

The answer to this question heavily depends on the hardware that the data in question is stored on. Storage media comes in two types: hard disk drives (HDDs), or solid state drives (SSDs). These two options function through vastly different methods:

This single difference is the source of many others that often make one storage device the better option over the other. However, we’re here to talk about removing data from these devices, not adding to it… but as it turns out, this isn’t such a straightforward process where SSDs are concerned.

Not All Data is Deleted the Same Way

HDDs Have a Relatively Simple Process

If you’re using a hard disk drive, deleting data is relatively simple. The arm is positioned over the disk in the appropriate spot and marks the data written there as “to be overwritten.”

SSDs are a Little More Complicated

Because SSDs use flash data, they can’t just be overwritten. The existing data on the cell needs to be erased before any data can be added back—but this takes valuable time and could slow things down.

This is why SATA-capable SSDs can use TRIM.

TRIM is a command that informs the SSD which data blocks can be erased, helping extend the life of the drive and making the entire process more efficient. SSDs have an internal operation called garbage collection where valid data is moved from a block that contains data to be deleted. TRIM adds to this process by preventing discarded or otherwise invalidated data from being copied, allowing the SSD to ignore certain data points during garbage collection and thereby reducing the number of write cycles the SSD will be subject to.

This all happens in the background, too, so you can keep working with the confidence that you’ll have the storage space you’ll need.

Can You Trust that Your Data is Really Gone?

Unfortunately, the answer can be more challenging than you’d expect.

In an attempt to preserve the longevity of the SSD, the SSD will fib to the OS a little bit in terms of which data blocks are available so that the different cells age at the same rate. This is called wear-leveling, and makes it totally plausible that certain blocks weren’t really trimmed through TRIM, simply because the SSD is trying to preserve itself. In addition, TRIM involves some buffer space, which could very well contain recent data as well.

So, You Can Sometimes Be Somewhat Confident that Your Data is Deleted (but Not Really)

Don’t get us wrong, your files will generally be deleted. However, you can only be so sure about that—and don’t get us started on security. This is all critical to keep in mind when you’re planning to dispose of a device, particularly when you plan to donate it or resell it.

Lean On Us for Assistance with Your Hardware Refreshes

While upgrading your business’ technology is a great way to ensure it remains reliable, any good your improvements do will be undone if the technology you’ve replaced winds up causing a data breach.

While we can completely wipe a hard drive on your behalf, it may just be more practical to take more extreme measures. Since a new hard drive is relatively affordable and a used drive won’t realistically last very long, we often recommend destroying the drive beyond any hope of data retrieval—and this goes double for drives that contain sensitive data.